I’m the Audio Director at IllFonic which means I oversee everything audio related that goes into our games including sound design, dialogue, music, and sometimes marketing materials like trailers. We have a fairly small but wonderfully talented team in the audio dept, and we have some fantastic partners we work with for specific areas of audio when we ramp up projects.

I’ve worked in sound for about 20 years, I spent the first few years working as an electronic artist for record labels such as Warp Records and Planet Mu. I toured a lot and played music in all sorts of places. I later wanted to move into sound design because I’ve always loved games and wanted to experiment and learn more about sound. I did some indie games and taught myself Unreal, I recorded a lot. Then got a job at Rebellion and created all the cinematics for Aliens vs Predator 2010 and some in-game stuff like the motion tracker etc. I’m lucky enough to have worked on some of the biggest properties in games like Gears of War, Hitman, Watch Dogs, and Arkham. I’m always honoured when I get to record or create something that is loved by so many people.

Every project is different and even within a day I can be doing a number of varied audio tasks. I always try to challenge myself!

On The Division 2 my involvement started with organising a large scale weapons recording session. I was contacted because of my experience recording weapon sounds for a number of projects previously, particularly in a variety of urban and interior locations; which is something unusual that I’ve done a lot of. The relationship with The Division 2 team became more and more collaborative while I was at Pinewood Studios and I managed all the dialogue recording for them, which was a huge operation. At Pinewood we always strived to achieve the highest possible level of quality so we worked with the actors in unusual ways, like roleplaying combat scenarios with fake firearms in order to get a level of tension and realism before a recording session.

Shadow of the Tomb Raider was an early Dolby Atmos games project. We had plenty of experience mixing films in Dolby Atmos. I believe that while a couple of games had shipped with Dolby Atmos on Windows, we were the first to ship with Dolby Atmos on console. The Tomb Raider audio team saw how passionate and experienced we were about games and decided to entrust us in doing the final mix with them. I worked with them on setting up the technology to facilitate object-based mixing from their game engine in our theatres, and worked with them on the final mix. I also directed the auditions for the London cast of the game, young Lara and her parents. The voice and performance capture for them was amazing to be involved with.

On Total War Warhammer II I did the Sound Design for many of the cinematics in the game. For Total War Three Kingdoms my role as Head of Interactive Audio at Pinewood was to ensure dialogue editing and other areas of sound were to the highest standard possible while working with CA on a granular approach to their foley design.

Absolutely, you don’t always want a project to be 100% real-world accurate, but taking time to listen to everything around you in the world and explore acoustics means you have a greater understanding of how you can break the rules and create a sound or a mix that’s hyper-realistic, or entirely fictitious. I try to travel and record as much as possible, and I bring at least 1 recorder with me wherever I go. Inspiration can come from anywhere but I try not to draw inspiration too much from other games; and always try to make my work surprising and exciting for people to hear. The process starts with a feeling. A lot of my work is around defining what I want to feel at a particular moment in a game, putting myself in the player's position, and what needs to be done with sound and music to support that; and of course using dialogue.

I believe I’m the first (possibly only?) person to record some NLAW Anti-Tank Missiles while shadowing the SAS running training exercises. Those are some of the sounds I used for Predator: Hunting Grounds, Wipeout Omega Collection, and Gears of War. I recorded the sound of a Spas 12 shotgun being fired in a bathroom with an ambisonic mic in the toilet cubicle, that was for Wolfenstein The New Colossus. I have also recorded someone growling in a very remote volcanic cave in Iceland and used that for creepy ambience layers. 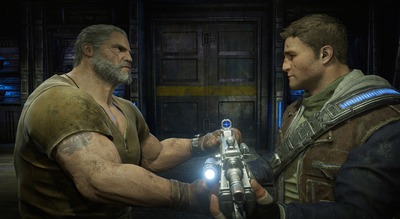 I would love to work on a sequel to a very unique game I was the Audio Director on a few years ago called The Invisible Hours. It's an entirely motion captured theatrical experience like nothing else. You observe a murder mystery and you can control time by pausing, rewinding, and forwarding while being able to move around to witness different scenes. You can be downstairs right up close to an intense interrogation while hearing the foot scuffles and furniture of an argument in the room above.  The depth of detail and subtlety I put in for audio is almost unheard of for games.

This is a hugely fun project to work on. I encourage the Audio Team to think outside the box and challenge themselves, as long as we all uphold the pillars for the audio direction. One of the most fun areas of the game to create was the made up language spoken by the gang leaders, and the enemies. For this I took inspiration from some of the made up words and slang that my friends and I had growing up. It was weird interpretations of lyrics or what we thought some unintelligible speech from a game was saying and some slang from where we grew up in London that kept evolving and twisting. I wanted it to sound futuristic, but completely natural. Thanks to our wonderful voice actors it does sound completely natural! 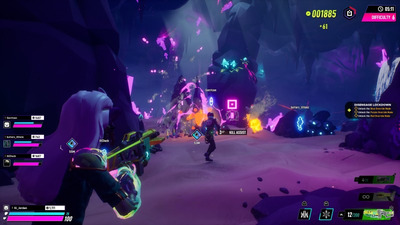 It was the same with the music. I wanted it to sound like a kid in the far future was making beats based off an old mixtape they found with Dubstep, Grime, and other bass music on it. They wouldn’t make that music with the same conventions that most people today do, they’d make it from a totally fresh perspective; new and surprising, like nothing heard in any other game out today. That’s what I wanted for the music. Players seem to be really hyped about the music. I’m really pleased with what we’ve done there and want to thank all the artists involved because it’s them that really deserve the credit!

It’s always fun to create something new and original. It's a good challenge to define the aesthetic for audio from nothing! In this project it was fun to go really far in terms of the character and how bold we could be. For example, if you talk to Gig and Tera, the 2 robots in Gilly’s Arcade, they both speak with synth bass sounds filled with cheeky character. There’s also an easter egg in the dialogue of the gang leaders, I don't think anyone has caught it yet. :)

I’m always impressed by the variety of ways different teams approach audio in their games. As an industry we share a good amount of knowledge at conferences and in online articles. There’s so much that is different from one team to the next in terms of how they build their audio pipelines, how they approach asset creation, modularity, and workflow that games with similar needs can end up sounding so different.

Grab a small, cheap handheld recorder and go out and start recording. Record as much as you can and then listen to it and scrutinize it. Use your sounds to recreate the audio for a short section of gameplay in a popular game, keep it simple at first, and just have fun with it.  Try and realise if something you’ve made sounds small or large, or if it’s distant or close, or if it has lots of movement or rhythm or it’s simple. Try and understand why something doesn’t sound right, try and think about what you want to feel from the sounds you’re working on. Create your own library of sounds. Don’t worry too much about having really expensive equipment or showing off too much on social media. Just focus on recording, designing, and critiquing your own work.