Q: First, could you explain your background in the video game industry and what is your current role and responsibilities on Scavengers?

I head up the Art and UX on Scavengers, and I am one of the co-founders of Midwinter Entertainment. Prior to that, I served at Zynga as Art and Creative Director for FarmVille 2, and have held similar positions at both Disney and EA. Aside from Midwinter and Scavengers, most proud contributions are co-creating the NBA Street and Def Jam (Vendetta/Fight for NY) franchises for EA.

Q: Could you give your own perspective on Scavengers, how you would describe its universe, the goals and what do you like about this project?

When we started Midwinter, we were driven by a shared purpose to create unique, new universes for players to experience together.  With our first game Scavengers, players will complete objectives together in a competition to power up and unlock the secrets of a virus ravaging the Earth. My favorite part of the game is winter-jungling; similar to a MOBA, you must tackle encounters guarded by AI foes to gain datapoints (the main objective of each map) and power-up - but other teams are on the map and could expose you while you are weak. You can also hunt and take advantage of other teams while they’re mid-battle too. 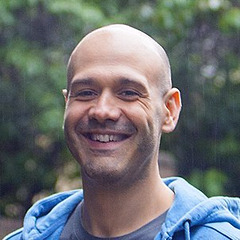 Q:The development of the game must be quite difficult with the pandemic, how does this affect your daily work?

We have the main studio in Kirkland WA, but early in our formation we decided to set up as a remote-friendly development studio. Our move to remote, technically, was swift and effective - but at a human-level, far more difficult. Day to day, as an art director, I find I have more time available to do focused review, which allows for more attention to detail. On the flipside, the collaboration with team members is less “synchronous”. For example, tuning color values with another artist is much easier if we are looking at the same monitor together, far more difficult over a video call. It has also been challenging for our animators, as they are not as easily able to coordinate a motion capture shoot as a group for example. And of course the pandemic has created a number of difficult human challenges across the team. We’re all trying to do our best work through a crisis.

Q: The Scavengers universe is meant to be post-apocalyptic. A genre that we find more and more today in various works. It seems difficult to bring a new vision to it without being "polluted" by what already exists, right?

This challenge applies to all media, really. Finding a way to make your mark and develop truly unique work is difficult in any genre. I try to break it down and build it up. When studying the post-apocalyptic genre, one of the hallmarks I find is to have locations and setpieces that are familiar and nostalgic. It’s much more powerful and personal when someone sees the school they grew up in, treated through the lenses of the setting, in this case: cold, the passage of time, and the horrors of the Scourge. That’s much more interesting and relatable than a kitbashed sci-fi military base for example. Almost everyone has been to a school, but most people only relate to a sci-fi military base from what they get in other media. 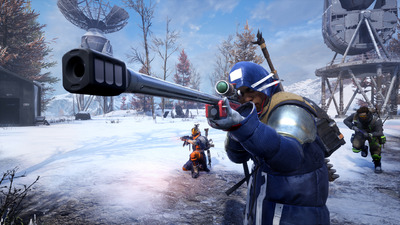 Q: What were your main inspirations regarding this project?

First and foremost, Scavengers is a gameplay led studio, the majority of our inspiration comes daily from our discussions after playtest. If we go back to the seed of the studio, most of us were playing a lot of both MOBA and RTS at the time, so we’ve leaned into those mechanics quite heavily during the development of Scavengers. I consider myself a practical art director (as opposed to visionary) and I tend to draw inspiration from a wide array of sources. I’m impressed by the visual splendor from Joseph Kosinski and Bradley Munkowitz, and I have always been inspired by Masumune Shirow’s vision for the future. I enjoy nature, especially the thrill of snowboarding. I do a lot of “winter field studies” and bring many of those observations and life experiences into the project.

Q: Besides those related to the pandemic, what are or have been your difficulties regarding the creation of the Scavengers universe?

The hard part isn’t developing the look; the hard part is getting everyone to use it. Part of my job is to make sure everyone on the team (from the artists, to the designers, to the graphics engineers to the marketing department to the UI team, all of our partner studios) are all “singing from the same sheet of music.” This is often an exercise in reduction - I find myself saying “not now” to new colors, shapes, techniques or styles that get gradually introduced through the course of natural development. I’m usually re-surfacing good examples of older work we’ve done, to point the team towards problems we have already solved, so that our product image remains as consistent, concentrated and as high quality as it can be. 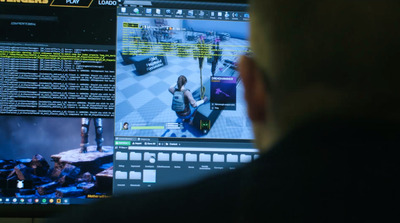 Q: We are talking more and more openly about the "Crunch" in various video game companies. What is your opinion on this practice? Is this something that you have already experienced?

We like to say “It’s a marathon, not a sprint” meaning, we would much rather create an environment where the team is able to continually improve Scavengers and nurture our community over a long duration, than set the team to crunch towards one launch date and cross our fingers that the game is successful. We’re an underdog developer working on an unknown property and pushing the bounds of a new technology. Offering a series of playtest events has given us more than one “kick at the can” which allows us to prepare for bigger and bigger challenges as we continue to grow Scavengers.

Q: Any advice you would  like to give to future Scavengers players?

Set your loadouts! Scavengers is quite deep with a lot of mechanics, and winning will require some forethought, strategy, communication. It will take many sessions to master all of the different styles. Each explorer has their own unique playstyle, every weapon configuration plays differently and items all offer unique pros and cons. Try different strategies and see what works best for you.

Q: First, could you explain your background in the video game industry and what is your current role and responsibilities on Scavengers?

I’ve been lucky enough to work in the games industry for over twenty-five years. Over that time I’ve worked on a variety of different genres and franchises, from arcade sports (NBA Street), to fighting games (Def Jam FFNY), and later shooters (Turok). In 2009, I became one of the founding members of 343 Industries, where I was the Creative Director on Halo 4 before becoming studio head for the development of Halo 5 : Guardians. After Halo 5, I left 343 Industries to co-found Midwinter Entertainment alongside long-time friends and industry veterans Daryl Anselmo, Fredrick Persson, and Peter Burzynski. I’m CEO of the studio as we work on our first title, Scavengers. 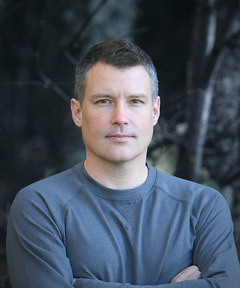 Q: Could you give your own perspective on Scavengers, how you would describe its universe, the goals and what do you like about this project?

When we started Midwinter, our team had a shared vision for a session-based multiplayer experience that would blend elements of PvE and PvP with survival gameplay. We wanted to create a highly-replayable experience that offered a unique take on competitive gameplay. What that means is, we’ve created a strategic sandbox that offers something rewarding no matter what your playstyle. That freedom of expression is something I’ve been passionate about throughout the development of the game.

When it comes to the world and its design, we’ve been inspired by a number of different sources, including dystopian sci-fi films and books like The Road, Annihilation, and Hugh Howey’s Wool trilogy. While our primary focus is on providing players with tools to create their own memorable gameplay stories, we’ve also tried to imbue a sense of place and history to the world of Scavengers. Over time, we’ll continue to expand our narrative as we introduce new characters and dangers to the game.

Q: Your team is made from talents who worked on prestigious games like Battlefield or Halo to name a few. Is it complicated to bring together such a diverse team on a project ?

Many of the team members at Midwinter have worked together on past projects, and it certainly helps to have that familiarity with one another. As we’ve continued to grow, we’ve been fortunate enough to attract incredibly talented individuals with a diverse range of backgrounds. We’re still a relatively small team, but we feel privileged to have a range of experience, from major AAA titles, to members of the studio who are working on their first game. We’re a very collaborative team, with a shared passion for the game we’re making together. That passion has helped us overcome any challenges, including a shift to full-time remote development over the past year. 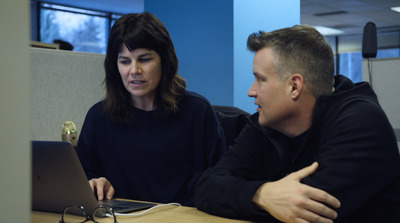 Q: Scavengers, because of various aspects of the game, seems to join the category of the "Battle royale" while mixing survival with PvE. Aren't you worried that all of these features (PvP and PvE) will be difficult to balance?

Balance between these different aspects of Scavengers and the ways in which they complement one another has been a big focus for our team since the beginning. Our goal has always been to provide players with a multitude of different strategies for success, and to ensure that each approach remains equally viable. There are a number of different aspects of the design that support that goal, including map layout, the balance of weapons, items and abilities, and the tuning of our session economy. Ultimately, what has played a critical role in our quest for balance has been our playtesting process. We’ve been testing the game with thousands of players for well over a year now, with a diverse community that represents many different playstyles and preferences. The feedback and gameplay data we’ve received from players throughout that process has been invaluable and has helped us to evolve and improve the experience to where it is today.

Q: The title will be available on PC, PS4 and XboxOne. Are there any plans for the new generation (PS5, Xbox X)?

We haven’t announced any plans for the latest console hardware. We’re excited to be bringing Scavengers to both a PC and console audience later this year. We’ll have more news on release timings in the near future.

Q: We are talking more and more openly about the "Crunch" in various video game companies. What is your opinion on this practice? Is this something that you have already experienced?

Crunch was fairly commonplace when I started in the industry over 25 years ago. I remember working 100+ hour weeks in the lead-up to ship on some of the first teams I was a part of. Since then, we’ve seen increased awareness of the impact of crunch, the toll it takes on individuals and the diminishing returns that come from working long hours. Especially with the more recent trend toward live service games, it has become obvious that crunch simply doesn’t work. Creative people don’t do their best work under sustained duress, and crunching to hit a specific milestone doesn’t help when you’re operating a live game. Live games are a marathon, not a sprint. 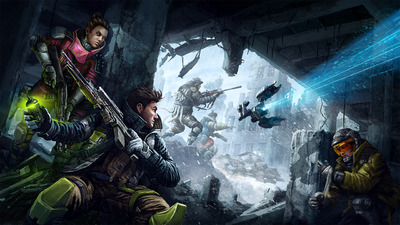 Q: If you had to motivate players to join the Scavengers universe in one sentence, what would it be?

If you’re looking for a sandbox shooter that supports a high degree of strategic freedom, as you compete to survive in a hostile living world, then Scavengers is the game for you!